Performers will meet at a parking lot near MacArthur Park at 11am (location TBD).

Performance will begin at noon, departing from SE side of MacArthur park, corner of S Alvarado St and Wilshire Blvd.

Getting there:
Driving and parking will be crazy.  Take Metro!
Metro Purple or Red line to "Westlake / MacArthur Park" station

Additional details about the event: http://ciclavia.org

In celebration of its 100-year anniversary, the LA Philharmonic has commissioned artists including Arugakki to compose site-specific music for the September 30 CicLAvia: Celebrate LA!

We'll play taiko on the streets of Downtown Los Angeles! 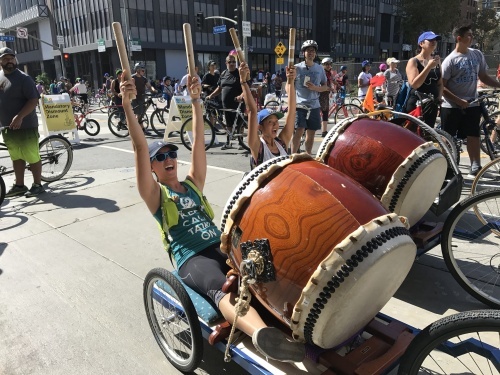 Started in 2010, CicLAvia temporarly closes streets to car traffic and opens them to tens of thousands of Los Angelenos as a public park.  The upcoming September 30th CicLAvia teams up with the Los Angeles Philharmonic to celebrate the LA Phil's 100th anniversary.  More than 1800 musicians will perform at various stages and along the CicLAvia route.  Arugakki was commissioned to write site-specific music for the event and is debuting two new pieces for taiko.

The 30-member taiko ensemble departs from MacArthur Park at 12 noon, drumming along the CicLAvia route to downtown Los Angeles.  Following the approximately 2-hour performance, the ensemble will ride home, drumming from Los Angeles to Torrance.

Few instruments are more challenging for human-powered transport than the massive Japanese taiko drums.  In traditional Japanese festivals, however, the instruments are often hoisted by teams, and the sweat and teamwork required are an integral part of the experience.  For the first time, the Arugakki bike ensemble will pull a five-foot diameter "o-oke" drum made by the 409-year-old company, Asano Taiko.  Arugakki is sponsored by the North American branch, Asano Taiko U.S., and the majority of the ensemble's instruments are world-class drums directly from Japan.

For Torrance-based Arugakki, the bike-powered performance is an outgrowth of Bergstrom's environmental concerns.  "As my career grew, so did my air travel, and I realized it was getting worse...  I don't want my success as a musician to be bad for the environment."  Five years ago Bergstrom got rid of his car, created a plan for reducing his CO2 from flying, and set out to design local alternatives to the long-distance performances he had previously been seeking.  As a celebration of bicycles and Los Angeles, CicLAvia was the perfect fit.

For the past five years Bergstrom has been designing and welding custom bike carts and bike attachments that allow for mobile taiko.  Arugakki's upcoming performance at "Celebrate LA!" is sponsored by LA bike company, CERO, providing three Cero One cargo bicycles.  The cargo racks of the Cero One added six drums to the ensemble.

"My dream is a mobile taiko concert.  Imagine riding your bike around a corner in Los Angeles and finding yourself in a performance where the whole city rings with the huge sound of taiko," says Bergstrom.  With massive drums, hand-held percussion, and 30 performers, Arugakki is moving ever closer to its dream.