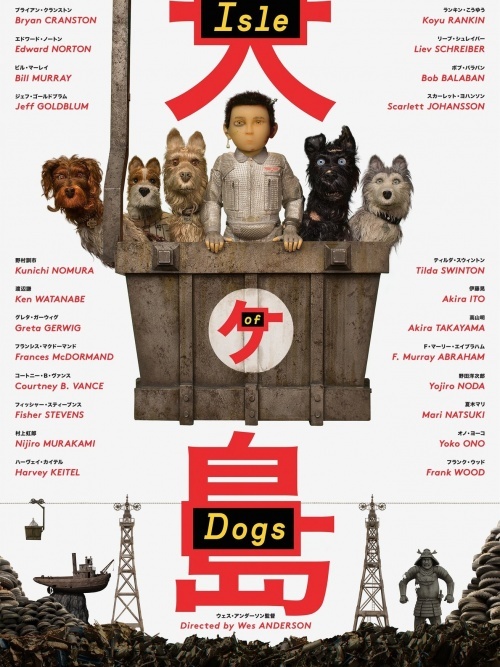 Wow!  Isle of Dogs is absolutely wonderful!  It's rare that a feel-good, sweet story is given such artful treatment.  It has the purity and attention to detail of Finding Nemo, but with more quirkiness and less gloss.  The character animation and voices create compelling characters, with lots of subtle gestures, well-timed silences, and simultaneous dialogue.  The set design and cinematography manage to make an island of trash and its filthy beasts beautiful.  Even a surgery scene, with the scalpel cutting flesh and an organ transplanted, is lovely to watch.  Much of the movie is in Japanese, and while all the important parts are carefully and cleverly translated, I appreciated knowing the language.  It felt like a treat... "this movie is made for us!"  I've read criticisms of the movie's use of Japanese, that it's overy simplified and that casting the (ultimately victorious) dogs as English speakers sets up a hostile relationship between the cultures.  I didn't feel any of this.  The animators' extreme attention to detail, like the carefully drawn Japanese blackboard and the gracefully rendered movements of the sushi chef, felt essentially honoring.  I was totally captivated.

We learned of the movie because the score features taiko, atarigane, and other percussion by Kaoru Watanabe.  A few scenes even incporporate animated taiko players, their little clay bachi diligently synced to the track.  To me (caveat: I know nothing about how movie scores work), the music seemed decidely simpler than the visual aspects of the movie.  Whereas the animation seemed intent on constantly changing the story-telling devices, the music felt more "complementary", like it was careful not to overstep.  Recurring themes and simple rhythms suggested that the "instrumentation" and "cultural references" were the guiding musical concepts.  In the same way that Wes Anderson keeps the pace up by interrupting a scene as soon as the point is made, I wondered what it would be like if the music were truncated once the melodies and rhythmic elements had been stated.  In the same way that the visuals frequently have two simultaneous actions -- the cable car whizzing to its doom while characters explicate the plot with dialogue -- the music might have had mutliple elements developing on simultaneous but separate tracks.  The English translations are provided in one moment by a radio reporter, the next by printed text overlay, and the next by character interjections.  What would happen if the musical melody were moved between instruments in a similar fashion?  How might the woven uses of English and Japanese apply to the music?

A mess, probably.  I'm guessing Alexandre Desplat, the composer, Kaoru, and the others in the Music Department probably steered away from such complications in the effort to provide rhythmic grounding to a whir of a movie.  And what they've achieved is indeed a masterpiece.

Hiro and I have come away inspired and uplifted!