I play a musical instrument... but only for my own amazement.

My shamisen guild, Kineyakatsu, publishes a quarterly magazine for its members called Hanabishi.  The most recent edition includes an article I wrote after receiving my stage name.  Below is the scanned Japanese version and an English translation.  The photo is me with the head of the guild, Kineya Katsusaburo VII. 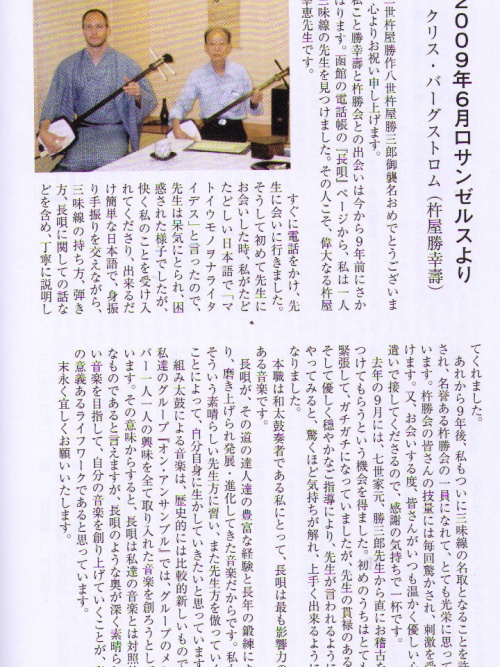 In the spring of 2000, I looked in the Hakodate phone book under "nagauta" and was pleasantly surprised to find an entry - a local shamisen teacher.  I called the number listed, and set up a meeting.  When I first met Kineya Katsuyukie, I said in broken Japanese, "Ma to iu mono wo naraitai desu." (I want to study "ma", the space between the notes and the timing of Japanese music.)  Sensei was surprised and confused, but took me as her student, doing her very best to explain in simple Japanese and expressive gestures the instrument, technique, and the stories behind the music.

Nine years later, I am honored to receive my natori, and to have interacted with many of the wonderful and inspiring members of Kineya Katsukai.  I am continually amazed and humbled by the talent and generocity of the group's members.  Last September I had the pleasure of taking a lesson with Katsu Saburo sensei.  I was nervous and flustered but was immediately settled by Sensei's gentle and confident teaching.  If I relaxed and simply did as he said, I got immediately better... it was like rolling downhill.

Nagauta is refined and developed, and its master players so learned and confident, that I can focus completely on mimicking my teachers.  Nagauta provides the wonderful challenge of bending myself to fit the curves and nuances of the music.  Kumi-daiko (ensemble wadaiko), and my work with On Ensemble in particular, is about self expression.  Kumi-daiko is a new artform, relatively inexperienced and raw, and On Ensemble's main goal is to create new music that honestly reflects our modern members' varied interests.

A balance of these two forces is bliss.  Nagauta provides a counterpoint to On Ensemble -- the study of an accomplished, complete artform.  It demonstrates how rich and sensitive music and musical technique can be.  On Ensemble provides a playground and support network for nurishing my own musical creations.  Although I'll likely never create music as powerful as nagauta, it will be an enjoyable life's work to try.