Natori: What's in a name?

I play a musical instrument... but only for my own amazement.

Natori: What's in a name?

I continue to play shamisen (though I've been on a break during the apartment remodel).  Katsuyukie Sensei continues to be an inspiring musician and friend.  We haven't been able to get a nagauta group running consistently in LA, but I've had a half-dozen or so gigs doing shamisen for movie soundtracks.  It's a treat to get paid for doing shamisen work! 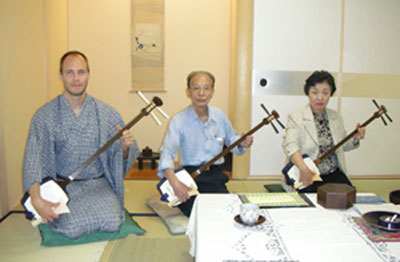 Maz and I have finished the bulk of our lessons here in Japan. Negotiating the etiquette of the Japanese traditional music world and living up to my teacher's high expectations is always a bit nerve wracking. But this time in Japan has been particularly useful and a major step for me as a player.

This has to be the most work I've ever done for a single piece of music. But it's looking like we'll be ready for Yobu on November 8!

Maz has been my right-hand man through all this. I've wanted to play a shamisen piece at an On Ensemble concert for a long time. The only problem is that nagauta is ensemble music, requiring lots of singers and shamisen players. As a first step, my teacher recommended Taiko no Kyoku, a more modern piece with only shamisen and taiko. The problem was that we then needed someone to play the traditional taiko part. This is where Maz stepped in. Although he's never learned this kind of taiko, he agreed to try it. 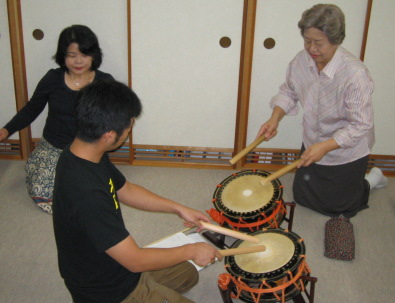 Maz has done an amazing job! Before our trip he listened to the old recording I have of the piece (copied from vinyl and not a great recording to start with) and transcribed the drum parts for the whole thing. I can only guess how many hours this must have taken him. He memorized the music and we headed for Tokyo.

My teacher set up a lesson with a traditional taiko teacher named Kikuyu Sensei. She is extremely talented, has been playing for decades, and is a really well-respected teacher. And she loved Maz! Although Maz was totally new to the playing form, he picked everything up extremely quickly. We were told after the lesson that she gave him advice that she only gives to very experienced players. Maz' talent and hard work won the day! Well done, Maz!

The last major responsibility on this trip was for me to meet the Iemoto (head master) of my shamisen school. I scheduled a lesson with him as an opportunity to introduce myself more formally and play shamisen for him before getting my natori. You might be wondering what this "natori" stuff is all about. It's pretty confusing and there's not much out there on the web... so here's my best understanding of the way all this works.

Each of the traditional Japanese arts, including the various forms of music, dance, ikebana, and tea ceremony, are organized into "schools". Each school has its own approach to that artform, so a flower arrangement by the Ikenobo school will look different than an arrangement by the Ohara school. Each school has a philosophy of its art and often a complimentary philosophy of teaching. The schools are strictly hierarchical, with a head teacher called the Iemoto, top level teachers below that, and then each teacher's students below that. Every player's lineage can be traced back to the Iemoto.

My school of shamisen is known as Kineya. The Iemoto is Kineya KatsuSaburo VII, and the position is passed down within the family. The Iemoto's main job is to guide the school and nurture its music. He is considered the living repository of Kineya music and is the last word on how to play the pieces.

Iemoto KatsuSaburo VII is particularly well respected. My teacher was his "uchi-deshi" when she was in her teens, meaning she lived with him as a full-time apprentice. This is the traditional way to study an art form but it's as much cooking and cleaning as it is learning music. My teacher loves and reveres the Iemoto, but I'm sure he was rough on her when she was young.

At some point within the process of studying, one becomes "natori". The "na" comes from the character meaning "name" and "tori" comes from the verb "toru", meaning to take. The significance of natori is complicated, because it's at once a mark of achievement, but it is also a commitment to further study (and how much of each depends on the teacher and the individual student). On the one hand, natori is a way for the school to say, "Good job coming this far... you can be one of us." On the other hand, it's a way for the student to say, "I'm ready to be serious about this and I'm making a commitment to this school and to this music." For this reason, "natori" does not equal "amazing player". I think my teacher, for example, got her stage name when she was in her mid teens and not yet very accomplished. On the other hand though, every great player I've ever seen is a natori. (For what it's worth, there is another level above natori called "shihan", which is technically required to be a teacher.)

Another thing that most people don't know is that you pay to get natori... and it's very expensive. It's probably rude to say exactly how much it is in public, so I'll just say it's plenty more than I've ever spent on any one thing. For this reason, once a student reaches a certain level of aptitude, he/she chooses to get natori.

So you might be wondering, why did I choose to get natori?

On the one hand, I'm not terribly interested in the notoriety of natori. As someone who has tried hard to blend in for the last 8 years, I'm hesitant to do anything that draws attention to my playing. Once I'm natori, I'm less able to get away with making mistakes... and I make a lot of mistakes. :)

In the last few years of thinking about natori, though, I've come to be convinced that natori is really important to me for other reasons, and worth every penny. When I went to Japan, I was in search of a teacher who would teach me the same as any Japanese student, and expect a lot of me in return. Most foreigners in Hakodate were only there for a short time, studying an art as a hobby. They come and go, and the teacher's don't expect them to be serious. It's certainly a noble thing to study a bit of art while you're in a foreign country, but I was worried that I would hit the "gaijin ceiling". I was in Japan expressly to study music.

At my first meeting, my shamisen teacher told me, "Don't expect me to treat you special just because you're a foreigner. Now sit up and stop squirming." I was terrified... and in love.

For 8 years, my teacher has slapped me around, taught me, and pushed me as hard as she can, as though I'm set to become a professional shamisen player. I had morning and night lessons every day she was in town. The only boundary I've faced is my own determination and abilities. In short, my teacher has been the dream sensei.

Natori and the commitment it represents is the perfect way to repay her. It's my chance to live up to her teaching, at least to some degree. It's intimidating and a ton of work... but it's definitely the next step in my career, and a step that makes my teacher proud.

So everything is all set... on November 8, I'll be receiving my natori!

Here are a few rules I've learned in my short time navigating the natori system:

That's about everything I know. Wish me luck in November 8!

I received my natori!  Here is the plaque which you hang in your place of practice. 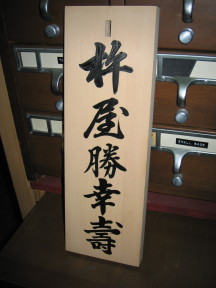 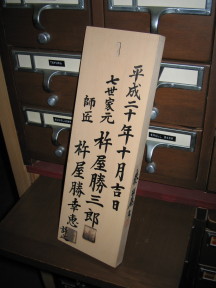 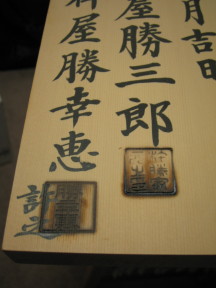