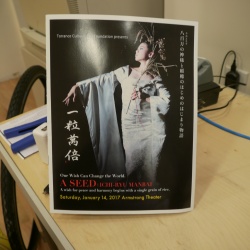 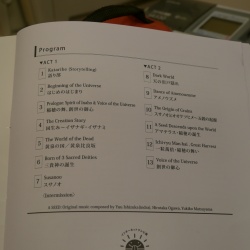 Seed is an ambitious performance, featuring 38 performers telling the Japanese myth of the creation of the universe, the world, man, and rice.  The story was told through narration by english-speaking actors, Noh recitation, modern and nihonbuyo dance, and music.  Instrumentation included kumidaiko by Yuu Ishizuka and others (odaiko, okedo and tsukeshime-daiko set, atarigane, cymbals, gong), narimono by Mochizuki Saburo et al (ookawa, tsuzumi, fue), plus koto, cello, guitar, and synthesizer.

The two scenes featuring the character Susano (Nakamura Narumi | Hiromi Ashmore) were my favorites, perhaps because they strayed the least from Kabuki style and musical structure and were some of the clearest moments of the storyline.  The cellist was my favorite musician, her technique allowed to shine with long, interesting melodic phrases.

A massive flower arrangement structured the final 15 minutes of the performance, and it was unintentionally amazing.  I don't know if I've ever been so nervous as an audience member.  Just as the story had reached its climax, the bamboo stand supporting the arrangement faltered.  The flower arranger himself, then his two assistants, then the theater director, then additional staff members, all struggled to hold the arrangement aloft.  The view from inside the arrangement must have been amazing, as if the flowers had been replaced by an arrangement of human hands.  Every shake garnered gasps from the audience.  I was incredibly tense.  It was in this amazing air that the 38 performers, now 37 because the arranger was trapped, took their long, extended bows.  When Hiro and I quickly got on our tandem bike to ride home, the cold air and pent-up tension led to a miraculous burst of speed.  We were home in no time.

"Ichi-ryu manbai" means "from one grain, ten thousand" and encapsulates the director's dream that a "single wish can spread amongst millions of people".  The sweetness of this idea is undermined for me by the all Japanese-heritage cast, a point of pride for the director (Yasushi Matsuura) during his introduction.  Within the work itself too, there is a sense that the performers are constrained by the multi-genre ensemble, and possibly by the story.  The guitarist doesn't know how to support the koto, and the dancers counting the kumidaiko beats rather than enraptured by the music.  To be fair, this is the debut performance, and as a debut it achieved a ton... not least of which is the amazing task of bringing together an incredible cast of performers.  Here's hoping there are additional chances for this group of composers and choreographers to make the elements more deeply intertwined, as though they share the seed that Matsuura imagines.